Loch Pooltiel is a beautiful sea loch, bordered on one side by Skye's highest cliff, over which a massive waterfall cascades after heavy rain.

At its head lies a picturesque beach of black, volcanic sand, where the gentle River Hamera flows into the crystal clear waters of the Loch and here stands a large cairn under which the slain from the Battle of Glendale were said to have been buried in 1492.

For centuries, there was only a drover's track connecting Glendale to the rest of Skye, along the course of what is now the B884 Glendale to Dunvegan road. Coal and supplies were brought in by the regular Glasgow-to-Dunvegan coastal puffer that docked at the pier. This boat service continued until relatively recent times and older residents of Milovaig still remember selling their potatoes to the boatman for half a crown a sack.

Cattle from the Uists were landed at Meanish Pier and driven across Skye to Kylerhea, where they were swum across the sound to the mainland.

In 1882, John MacPherson of Milovaig led an uprising against the landlord of the Glendale Estate, who was seeking to clear the crofters from their land to make way for, more profitable, sheep.

His actions led to the Royal Navy gunboat, Jackal, landing a troupe of marines at Meanish Pier in early 1883 to effect MacPherson's arrest. MacPherson being taken to Edinburgh and imprisoned for two months.

His noble stance encouraged others into defiance and the actions of these "Glendale Martyrs" led to the formation of the Napier Commission and security of tenure for crofters throughout Scotland.

A memorial to the Glendale Martyrs now stands beside the B884 on the pass that divides Glendale from the rest of the island.

On April 22nd, 2008, a film crew descended on Lower Milovaig to film scenes for a television advertisement for the Volvo XC90R. The scene dressers arrived the day before and spruced up the store shed at the Pier, giving it a lick of paint, fitting a flag pole and 'rescue' sign, and arranging various props around the building. A few days earlier, a flyer was delivered to all local residents advising them of the closure of the Pier road. 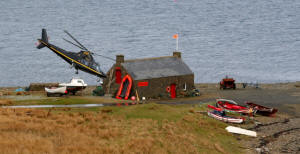 Helicopter used during a scene. 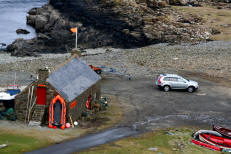 The car is the star: the Volvo XC90R.

A tall yacht was positioned off the Pier that had sailed all the way from Southhampton for the scenes. The car itself was one of several identical vehicles that had been driven over from Gothenburg.

The scenes filmed at Meanish Pier involved a lifeboat crew speeding to a coastguard hut (the shed) to rescue a stricken yacht, with a helicopter taking off as the car approached. The scene was later digitally altered to make it look like a stormy night, when in fact it was a glorious sunny day when filming occurred. Bowsers were used between takes to wet the road and buildings, and spray the car as it approached.

The advertisement was widely shown on UK Television during the Summer of 2008. 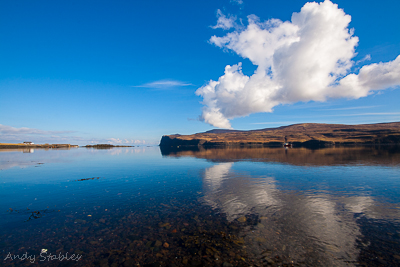 There was at least one bull orca NW of Pooltiel Fish Farm from 15:00 until at least 15:20 when mist rolled in. Probably JC or Aquarius or both. 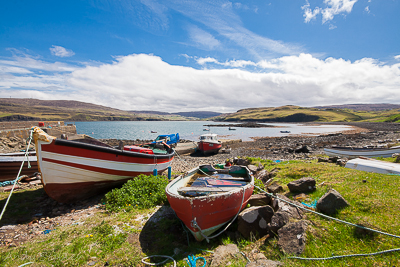 Boats at Meanish Pier.
Send mail to [email protected] with questions or comments about this web site.
Copyright ©2002-2023 Andrew Stables