The Wildlife of Glendale, Isle of Skye

Atlantic Grey Seals are very common in Loch Pooltiel. They are very curious of people and will come closer to investigate if you whistle or sing at the sea-shore. There are usually a few basking daily on the skerries in Loch Pooltiel at low tide.

This area is the best place on Skye for seeing whales, porpoises and dolphins. Dolphins are often seen outside the Three Chimneys Restaurant at Colbost. Minke whales and basking sharks are regularly seen off Neist Point from late April until the end of the Summer, with June/July being the peak months.

Even Killer Whales have entered Loch Pooltiel to hunt the seals. Read More

Otters often hunt for sea urchins on the shore of Loch Pooltiel and they regularly fish for trout in the many burns that flow into the Loch.

Broken sea urchin shells at the shoreline are a sure indicator of their presence. Read More

Some very interesting and unusual plants are common in Milovaig including Heath Spotted Orchid, Fragrant Orchid and Early Purple Orchid.

Black Guillemots are the commonest auk and are resident all year round. Gannets plunge-dive for fish into the Loch in the long Summer evenings. Fulmars nest on the sea cliffs.

Oystercatchers, Curlews, Snipe, Common Sandpipers and Rock Pipits are very common around the shoreline of Loch Pooltiel and breed on the heather moorland.

Whimbrels pass through on migration and Golden Plovers are common in Winter.

Milovaig is renowned for it impressive displays of wild flowers, with the fields beside Loch Pooltiel carpetted with flowers from Spring until late Autumn.

The Primroses and Violets of Spring, give way to beautiful wild bluebells in June and, in turn, to Orchids, Wild Herbs, Vetches and Heathers in Summer.

There was at least one bull orca NW of Pooltiel Fish Farm from 15:00 until at least 15:20 when mist rolled in. Probably JC or Aquarius or both. 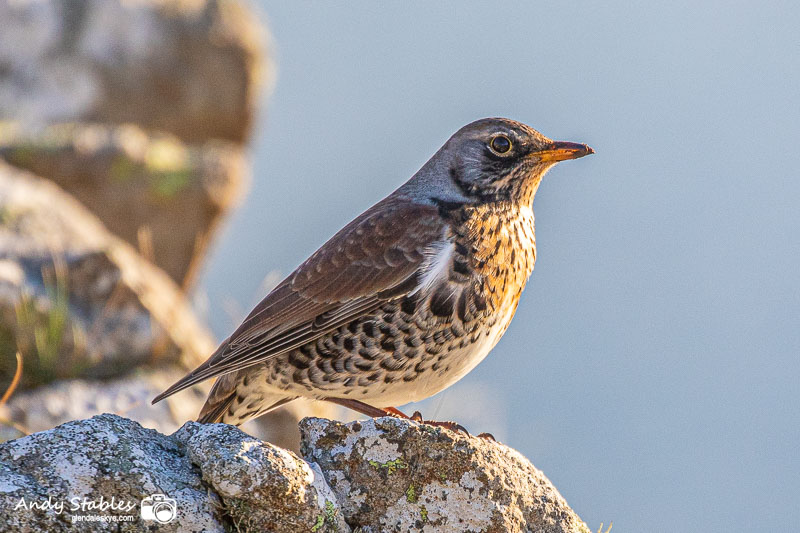 There was a single fieldfare, 3 golden plovers, 1 snipe and 5 purple sandpipers at Neist. No seabirds, except a few shags and a few usual gulls, and no cetaceans.

A ringed (blue over white left) sub-adult white-tailed eagle flew north along the bottom road in Lower Milovaig, early afternoon. Hence, not a bird from our Glendale pairs.

Both White-Tailed Eagles and Golden Eagles nest in North-West Skye. Merlins and Sparrowhawks often flash past through cottage gardens in pursuit of bird-table visitors.
Buzzards are the commonest raptor and pose at the roadsides, to the delight of the tourists, who leave Glendale happy to have seen an 'eagle'.

Wheatears, Stonechats, Twite, Ravens, Hooded Crows, Goldcrests, Redpolls and Cuckoos are common around the Cottages and regularly come into the gardens.

Sea Anemones and Winkles at Milovaig.