Gannets are very common in Glendale and they can be seen daily, diving close to the shore and Pier in Loch Pooltiel, between April and October.

It is a spectacular sight to watch them plunging head-first into the water from great heights on the long Summer evenings. 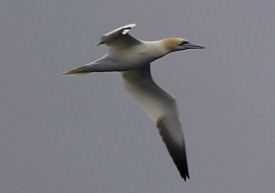 Great Skuas, commonly known as 'bonxies', and the daintier Arctic Skuas are now being seen regularly at Neist Point between May and September. Bonxies also regularly come into Loch Pooltiel to harass the gulls.

There were four black-headed gulls on the skerries in Loch Pooltiel at 6:30pm that flew off north out to sea later.

There was an early whooper swan on Loch Mor at 6pm.

A turnstone with four dunlins flew north past Neist Point heading towards North Uist in the morning.

In Summer, the stunning coastal waters and cliffs around Glendale are home to many hundreds of guillemots, razorbills, fulmars, kittiwakes and shags.

Puffins are also regularly seen off Neist Point in small numbers, although they do not nest on Skye.

The beautiful black guillemot, with its white wing-patches and red legs, is resident all year round.