Neist Point in Glendale is undisputedly the finest place on the Isle of Skye for watching whales, dolphins, porpoise and basking shark, with pods being resident from May through to September. The peak months are June and July, when sightings of Minke Whales become almost a daily event.

The Minke Whales often approach within 5 to 10 metres of the shore, giving spectacular views and the amazing opportunity to hear them 'blow' as they surface.

To get the best views, choose a day when the sea is flat calm and pick your way carefully to the water's edge between the end of the point and the lighthouse. Find a comfortable rock, with a good view either side, sit and wait... patiently!

Minke Whale & Razorbill by the shore at Neist.

The length of an adult Minke Whale is 7-10m (23-33ft) and the dorsal fin is located two thirds of the way along its body, i.e. at the tail end. In the above photograph, the length of the whale's body above the surface is around 3 metres.
A razorbill measures 0.4 metres from beak to tail.

Minke Whales often carry distinguishing marks, such as the one in the photograph (top right) that has a red, diagonal scar (\) on its left flank below the dorsal fin. Their commonest colouration is jet black but some individuals, believed to be juveniles, appear blueish with pale flanks.

For the closest views, Neist Point is the best place on Skye. They are also regularly seen off Lower Milovaig and have come inside Loch Pooltiel.

Common Dolphins are regularly seen in the Minch off Lower Milovaig and also off Neist Point during the summer months. They are also seen occasionally in Loch Dunvegan as far up as the Three Chimneys at Colbost.

These are the basic features that distinguish Glendale's commonest cetaceans:

The characteristic profile of a surfacing Minke Whale. 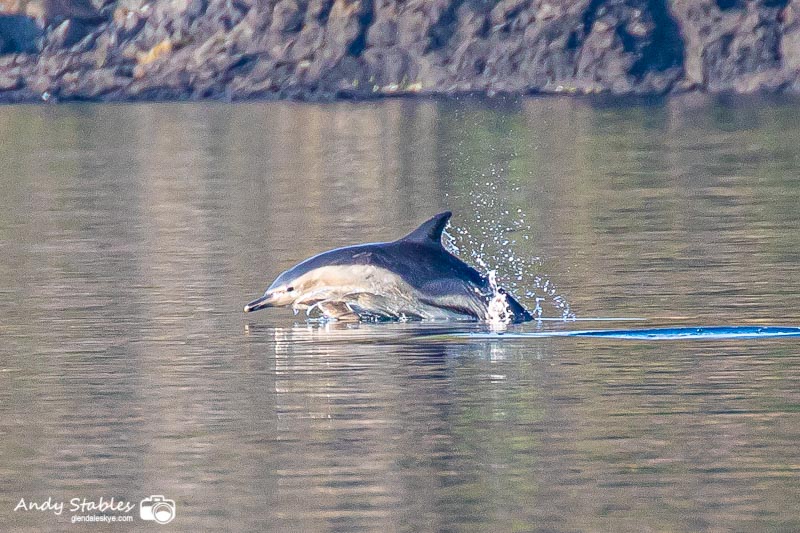 A pod of c.10 common dolphins were in Loch Pooltiel again tonight for about an hour. 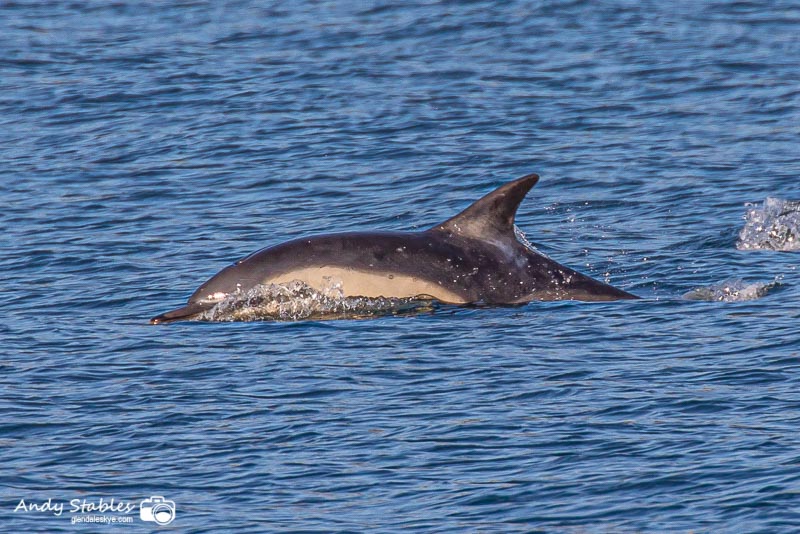 There was a pod of 12+ common dolphins in Loch Pooltiel from 6pm until 6:30pm.

There was a distant basking shark between Canna and Barra as viewed from Neist Point in the afternoon. There were at least six distant minke whales off Neist. There was a distant, small pod of common dolphins off Neist briefly. At least 12 harbour porpoises around the point, with four coming close in.

Killer whales are occasionally seen off the Neist Point and Milovaig. They have a distinctive large, upright dorsal fin.

This camcorder footage of a pod of killer whales was taken at Neist Point on July 23rd, 2008 by Matt Swain. 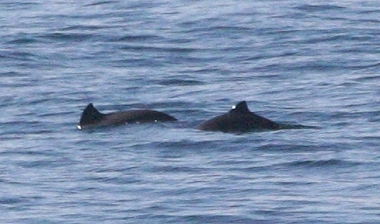 Harbour Porpoises are most often seen in the mouth of Loch Pooltiel, off Meanish Pier, with pods of up to 12 being present throughout the Summer. Another fairly good place for them is Moonen Bay, very close inshore, at the point where Loch Mor flows into the sea.

Basking sharks are Britain's largest fish and are totally unrelated to true sharks. They float around with their white, dustbin-like mouths wide open hoovering up plankton.

They are very common in the sheltered coves around Neist, Oisgill and Milovaig during the Summer months.